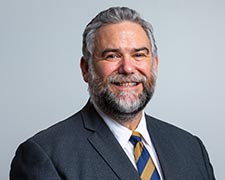 It’s an honor and a thrill to serve the Honors College as academic director. My own undergraduate experience at NYU was profoundly shaped by my involvement in a similar program, and I hope to contribute to the continued growth of the Honors College as a vibrant intellectual community where our best and brightest undergraduates can push themselves as scholars and citizens.

After NYU, I moved to New Zealand thanks to a Fulbright grant that allowed me to study at the University of Canterbury before returning to the U.S. to complete my MA and PhD at Rutgers University. I first came to Buffalo in 2001 to join UB’s Department of History as an assistant professor and fell in love with the city that I am proud to have made my home.

I am a historian of Ireland, Great Britain and the empire. My first book explored the role of sport in the creation of national ideals of masculinity, and my current book project examines the Great Famine in Ireland in a global context. As a cultural historian of gender, I have also developed a teaching interest in the history of fashion.

When not working, I can be found playing music with friends and family or watching sports, particularly soccer. My time living in London’s East End in the 1990s made me a devoted fan of West Ham United. I also follow Lazio in Serie A, Dortmund in Bundesliga, NYCFC in MLS and the U.S. women’s and men’s national teams. A lifelong Yankees and Knicks fan, I adopted the Bills, Bandits and Sabres when I moved to Buffalo and expect championships any year now.